So I decided to make all of my core family members amigurumi for Christmas, which you can see in THIS post.

But what do you crochet for a male? I had already crocheted a "Stanley the Octopus" for my Red Wing loving grandfather, but I still needed ideas for my other grandfather and my dad. The women in my family were really easy to choose for but I simply could not think of what to make for the guys... Until my husband chimed in.

"What about a fish?"

YES, THAT'S IT! So I crocheted two fish (which I made using this pattern)... And then I just had two amigurumi fish. 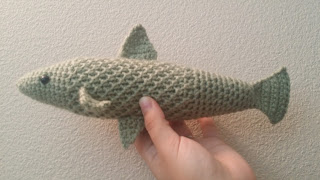 What would they do with the fish? Pick it up and put it down again? That seemed stupid but then I remembered what men often do with fish (besides eat them)...

They put them on a plaque and brag about their fish story!

After I finished one fish I was on the hunt for some plaques. I went straight to the thrift store, of course!

The thrift Gods were looking down upon me when I went into the thrift store that day and I found not one but two perfectly sized, perfectly shaped, very inexpensive wall hangings that looked fantastic as plaques! However, they obviously needed a little bit sprucing up. 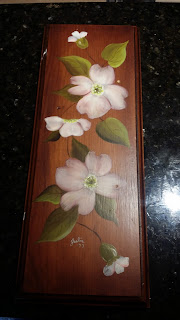 I failed to take a picture of both of the "before" plaques together, whoops! They're basically identical.


I set out to Home Depot for some hooks and paint. I knew what I had in mind but I had no idea if they even made what I was looking for in terms of hardware. Thankfully they did and so I hopped on home to start on the plaques. 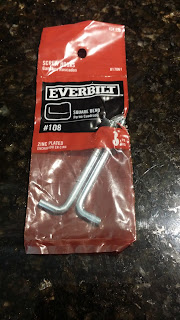 L shaped screw bars. These came in packs of three, because packs of two or four would be just too convenient, so I had to purchase two packs of them. 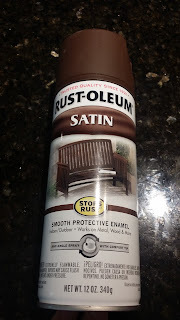 I wanted something "semi-gloss" ish. Not matte but not glossy, non textured, and brown. This was perfect!


I started out by cleaning the plaques using rubbing alcohol, cotton swabs, and cotton pads. This step was important because I didn't want any gross dust or grit on them when I painted them because I'd have ended up with gritty paint that wouldn't stick.

My plaques had a couple of small dents and chips in them, so I used some wall putty and a wooden popsicle stick (I happened to have some on hand because I normally use them for waxing) and I let that dry for a few minutes. They were small dents so they didn't take long at all. 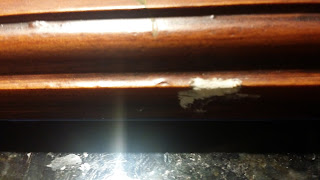 My filled dents. We had the putty on hand, but then again if your plaques don't have dents then you won't need putty at all! 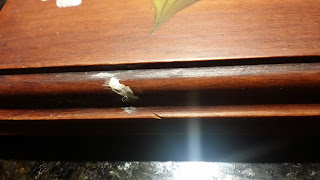 I then flipped them over and removed the metal hangers from the back and replaced them in a different spot so that the plaques became horizontal hangings instead of vertical hangings. 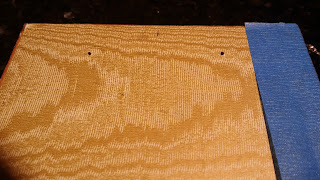 Again, I apparently do not have the foresight to take photos, so here you can see the holes where the metal hanger used to be. 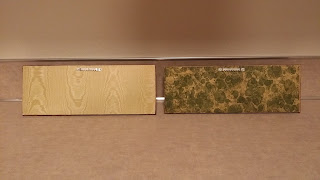 And here you can see where I moved the metal hanging bits to.


Then I plopped the fish (I had already finished one of them) on the front of the wood and marked where I wanted the hooks to go. I wanted to put the hooks in before I painted the wood just in case the paint/lacquer/wood chipped or split. This way, I was saving myself a step later so I wouldn't have to deal with the chipping or splitting after I had already painted them, meaning I would have had to paint them a second time. Your plaques will most likely be very different from what I got since mine were from the thrift store, so I won't get too detailed about where I put the hooks in.

Because the plaques I purchased already had a really neat backs (someone had pasted some really beautiful scrapbook paper on the back before they lacquered the wood), I wanted to make sure I didn't get any spray paint on the back. A little bit of painter's tape around the edges did the trick (I just wanted to prevent any bleeding). 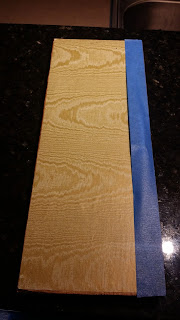 I did obviously put the tape around all four edges, but you get the gist.


Lastly, I cut bits of the plastic bag that my Home Depot purchases came in and wrapped them around the hooks and then taped them very close to the surface of the plaque so that I didn't get any paint on the hooks. 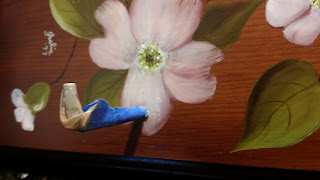 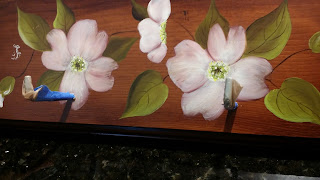 It was finally time to spray paint! Two to three coats of Rust-Oleum and they were ready to go (I know I did at least two but I may have done a third)! I let them dry overnight in the garage but that probably isn't totally necessary-- I just didn't want to bring them inside until the next day because it was raining that night. 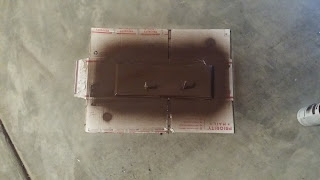 Alternatives of "hanging" the fish if you do not want any hooks showing include the following:

I wasn't interested in any of these options because I didn't think of the magnet thing until after I had thought of the plaque thing and the fish had already been crocheted and the others involved permanently sticking something to the outside of the fish, which was something I didn't want to do. I wanted the fish to be removable so that people could take it down and look at it if they wanted to, which ended up being a great idea on my part.

Also, an alternative option to painting would be sanding (my plaques had been hand painted on the front) and then re-lacquering, however I'm really weird about sandpaper and I felt that this would turn out much more effectively than if I had tried to sand off the art and restore the wood to its original condition. 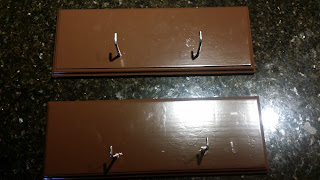 Finished plaque. If you see any slight bubbling (you can see some strange grittiness near one of the hooks), it's from the design underneath the paint. I could have sanded this off but sandpaper freaks me out and you can really only see it in very bright light, plus the fish cover it up.


Ta-da! I've done a lot of crafty things in my life there are very few that I am more proud about than these! They were so simple, easy, and they turned out looking so incredible. The total project, since I had the yarn, the safety eyes, and the stuffing (for the fish) and also the painter's tape and putty for the plaques, came out to around $13-15 dollars (though this obviously does not include the time that I spend on them, since if I were to sell something like this I would obviously have paid myself for my time). 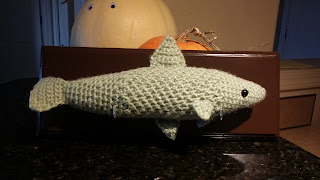 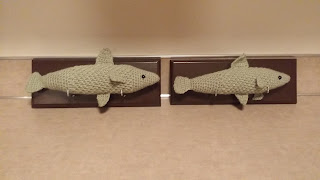 One of the fish turned out slightly larger than the other because I felt that the hook that the pattern called for was too large so I sized down to a smaller hook, which I forgot that I did when I made the second fish.

Ta-da! I'm so thrilled with how these turned out. I hope they inspire someone :)