So if you know me at all, you know that I watch YouTube more than I even watch TV. There will be days when I don't even pick up the remote, but there is never a day that I don't go on YouTube and watch whatever daily videos that I'm subscribed to.

Recently I've been noticing that a lot of YouTubers do a "Monthly Favorites" video. First of all, I am under no circumstances starting a YouTube channel. I don't have the patience for that kind of job, nor do I have a thick enough skin to deal with the kind of hate that goes on from subscribers, plus my social anxiety would likely make for a pretty boring channel. However, I do have a blog. It's not a big blog and I am by no means famous. I think like five people read my blog, and they're basically all family members. BUT the entire point of this blog is to let you guys into my head and into my life so that my family and friends back home know what's going on with me. If you follow me on things like Twitter and Snapchat, you may already know some of this stuff, but since most of you don't, I would LOVE to share some of the things that I come across that I fall in love with each month. 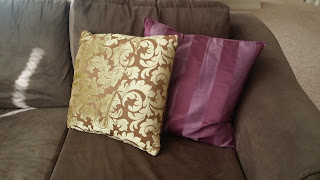 I've been wanting new couch pillows basically since we got this couch because the ones that it came with were such poor quality that the seams started shredding within the first month we had them. Then we struggled to find pillows that we both liked and that weren't going to put us into debt (have you SEEN the prices on throw pillows?!).

Our couch is obviously brown so we needed colors to go with that and we just happened upon these pillows within a week or so of each other.

The greenish ones are from Tuesday Morning ($9.99 each) AND THEY ARE SO VERY SOFT OH MY GOODNESS. The design is a velvety texture and they're beautiful.

The purple ones are from IKEA. The pillows themselves ($2.99) come separately from the pillow covers ($9.99), which is cool because then we can switch it up later if we want to without breaking the bank. 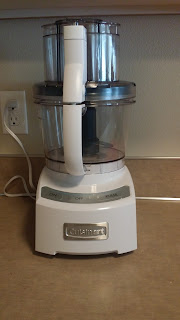 I've been wanting a food processor for a long time. We "had" a "food processor" (it was a blender attachment) and that just didn't cut it for me, so Patrick did a lot of research and ended up landing on a super powerful food processor with a crazy long warranty (I think it's seriously like a 30 year warranty), which, to us, is worth the price that we paid, especially since we have been on a low-carb diet and have been making a lot of our own veggie-rich food at home. We have used it quite a lot and we love it! Do you need any food processed? Come on over, I'll help you out. 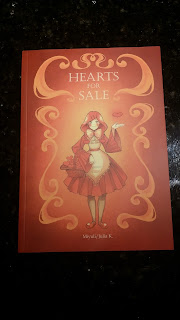 If you've read my First Anniversary Adventures blog, you'll know that I'm a little bit obsessed with my new signed comic from Patrick. I will seriously find myself wandering around the house and being drawn to it. I'll pick it up and put it down several times a day and I've probably already read it at least a dozen times in the 6 days that I've had it. There is even a new tattoo idea in the works based on the comic because it means so much to me. 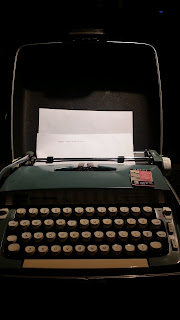 Seriously, who wouldn't love a vintage typewriter? If your answer is "no one" or "not me", I have concerns. 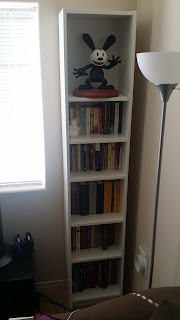 We have two. The other one is in Patrick's office.

Patrick has a LOT of books and honestly, most of them aren't even on shelves. Thank goodness we have extra storage here because we don't have enough room for all of our books to be out on display (I probably only have about 1/8 of the size of his collection). His office was looking pretty insane because things that would normally go on a bookcase couldn't because we didn't have enough room, so we invested in our own sanity and bought a couple of bookcases from IKEA. Now I basically have my own bookcase and I'm thrilled about it. I have to show off my J.K. Rowlings and S.E. Hintons, you know?! 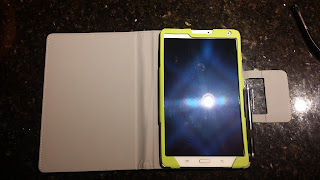 This item comes with a story. I have a hand-me-down tablet from Patrick, but I've been in the market for a new one for a while now because that tablet was heavy, took forever to charge, lost a charge really quickly, and just didn't run very smoothly. I kept doing my research and ended up finding a tablet that I really, really liked and was absolutely perfect for me and Patrick was planning on purchasing it for me for Christmas.

Magically one day we popped into Best Buy so that I could physically see the tablet and hold it and get a feel for it to make sure it was what I wanted. When we were there, we found that there were none on display and we had to ask the manager if he had any in back. He did, it was a "returned" item (or so we thought), and he brought it out for us to see. It was over $100 off of the original price because it wasn't brand new, in its original packaging, and didn't come with the accessories, but nothing seemed wrong with it and we jumped at the opportunity to save $100+.

Unfortunately when we got home, I found that the home screen image had somehow burned into the screen itself and we had to take it back (we hadn't seen it in the store because all we were able to see on the tablet was the completely blue "register" screen, and you could only see the burned image when the screen color was lighter, like if you were to open a white email screen). That's when I realized that-- duh!-- the item hadn't been returned, it had been the display item.

It turns out that that was the only one of that specific tablet that they had in store because Samsung had, for some unknown reason, done a very small release of these tablets and then discontinued them. I was disappointed because I felt that we had missed out on a potentially great deal (tablets are not cheap by any means)... Until we realized that they sold refurbished ones on the Best Buy website! We ordered one (for the same price we paid in store) and took a chance on a refurbished item. I'm pleased to say that I've had NO issues with it so far and obviously, since it's in this blog, I love it. Again, this is an early Christmas present. 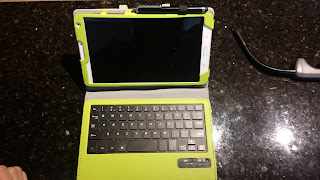 Please excuse the bendy lighter in the background. I like candles.

How cool is this case?! When I had finally settled on a tablet that I liked, I immediately started looking at cases. I knew that I wanted a folio case that came with a Bluetooth keyboard, because I truly use my tablet more than I ever pull out my laptop (unless I'm writing a blog post!), and I settled on this one. Then when we got the tablet a few months early because it was such a good deal, I knew I had to get a case. I'm the biggest klutz, and a tablet is NOT the type of thing you want to be clumsy with. The case has a magnetic, rechargeable, detachable Bluetooth keyboard, a little elastic tab to put a stylus in (which I happened to already have), a little prop up stand on the back, a magnetic closure, and the tablet screen turns off when you close the case. Cool, huh?! Again, this is an early Christmas present. 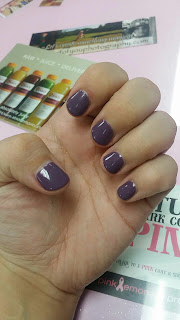 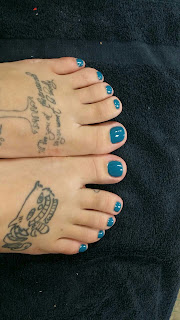 As you can see, I clearly got the best colors available. They're so pretty!

I have gotten super lazy about doing "girly things". I don't do my makeup more than once a month, I haven't been painting my nails or toes, and I almost never do anything with my hair other than put it up in a messy bun. At 23, I'm already tired of how tedious it is to be what society considers to be "feminine". That's not to say that I don't like doing these things, it's just that I have better things to do. So I haven't painted my nails or toes for at least six months (longer, I think, probably more like 9 or 10) because I hate when it chips and I have to remove it or pick it off almost immediately, which means my nails get gross and dry and they peel, and I hate waiting for it to dry. Long story short-- I don't have the patience to paint my nails every 4-7 days-- sometimes more often.

What I do have time for, apparently, is going to a nail salon to chat with some of the nicest women I've ever met so that I can get my nails done with gel polish! It's fun, relaxing, and I get my nails done!

I've been waiting to try gel polish because I know it lasts for a crazy long time and I have to say, I am so glad I did.

When Patrick and I were in Vancouver, WA this past July, I went for a massage and I made Patrick go for a mani/pedi. He ended up finding a super cute little salon in Vancouver and it's definitely worth the drive! So this time around when he finally had time for another pedicure, we made an appointment for me to have gel polish done on my hands and toes. I'm in love with it.

The third day I had the polish, I carved an entire thirty pound pumpkin and did lots of dishes by hand (as a result of the pumpkin carving) and still the polish didn't chip, which normally it would. I'm so glad I decided to do this and now I'm considering investing in my own gel setup, however the polishes aren't very cheap so in order to have a variety of options, it may be better to just go to the nail salon so I don't have to spend hundreds re-stocking my nail polish collection.


That's all for this month without making this post too crazy long! Stay tuned for my November monthly favorites sometime in the first week of December!
Posted by Brook at 11:19 AM No comments: