Straying from my usual type of post, I got a little crafty and decided to make a post about something I did myself while Patrick was out of town! 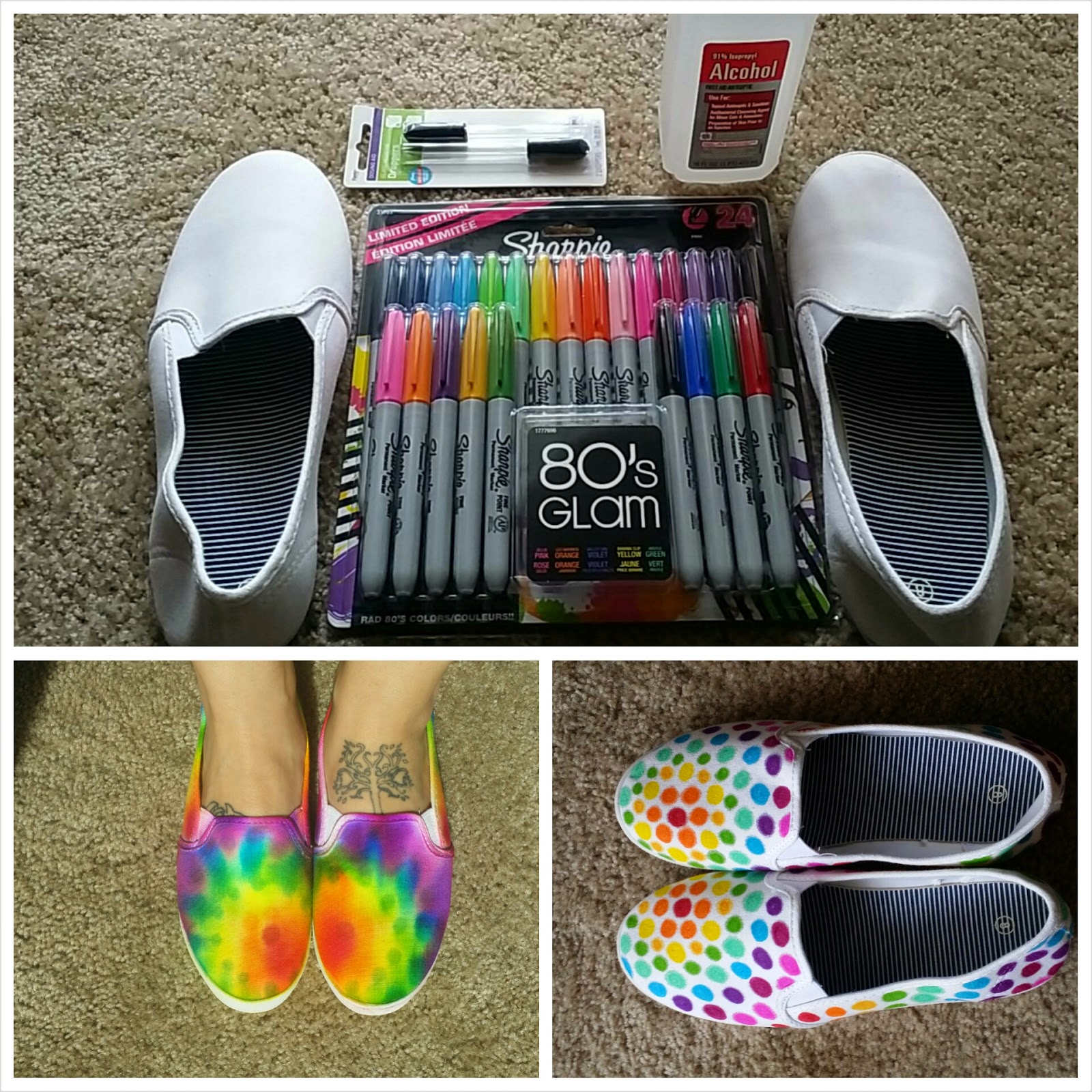 The idea is to make tie dye shoes using the following supplies: 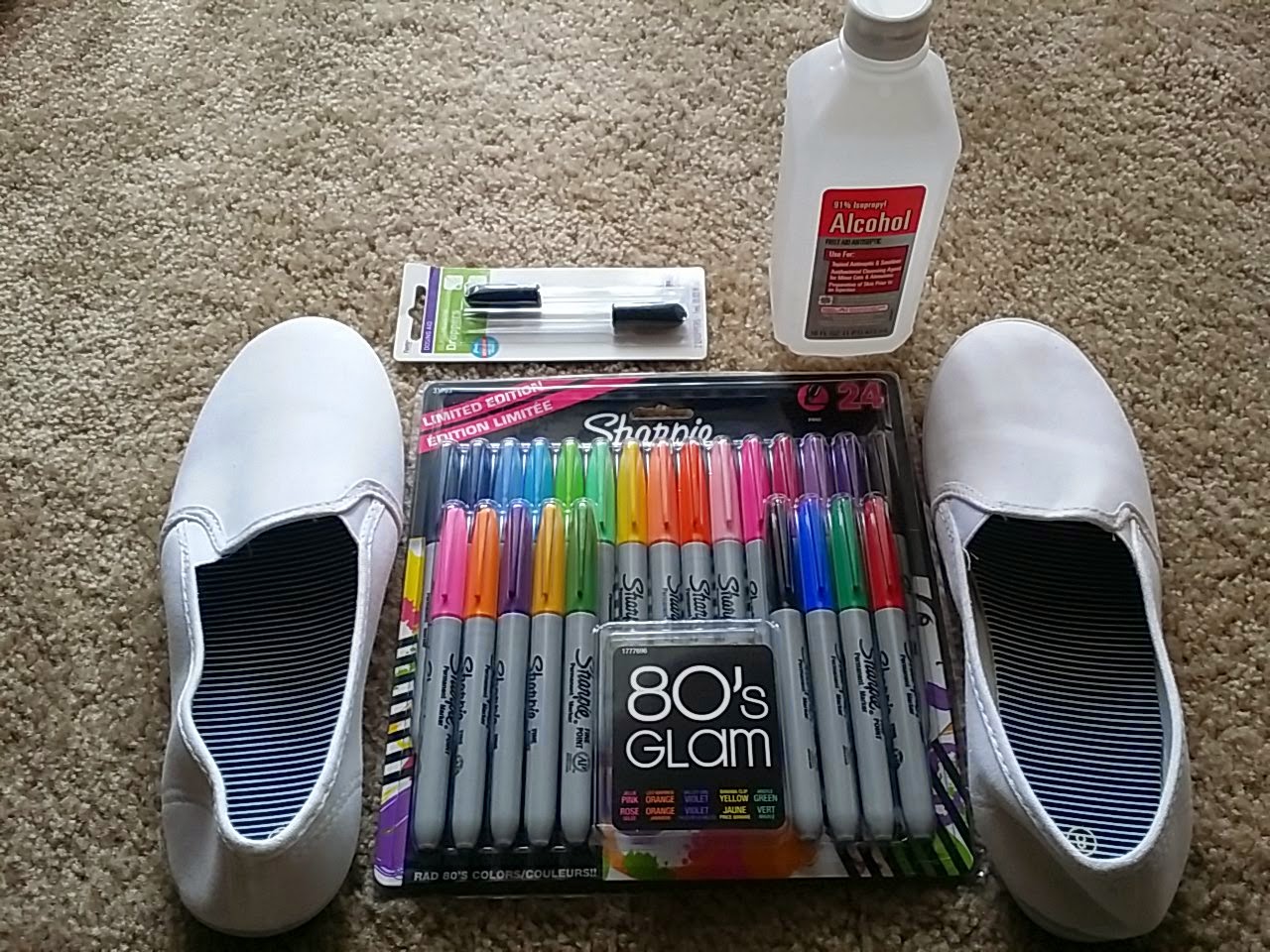 You may also need:
The inspiration came from this Pinterest post, originating from a girl named Ashlyn Hale. I had been planning on doing this project for a few weeks now, but when I saw that one of my favorite Youtubers, Bunny (aka Grav3yardGirl) posted this video about the exact project, I had to do it!

I went out and gathered all of my supplies, which I got from Wal Mart. The entire project cost me about $26.70 (+ tax). The good news is that the only thing that I "used up" was the pair of shoes. I still have 85% of the isopropyl alcohol, all of the Sharpies, and both of the eye droppers that I got in the package I bought!

I started by choosing the colors that I wanted to use on my shoes (I actually ended up adding in an extra green and an extra yellow, which are not pictured here, however they are pictured in the next photo). 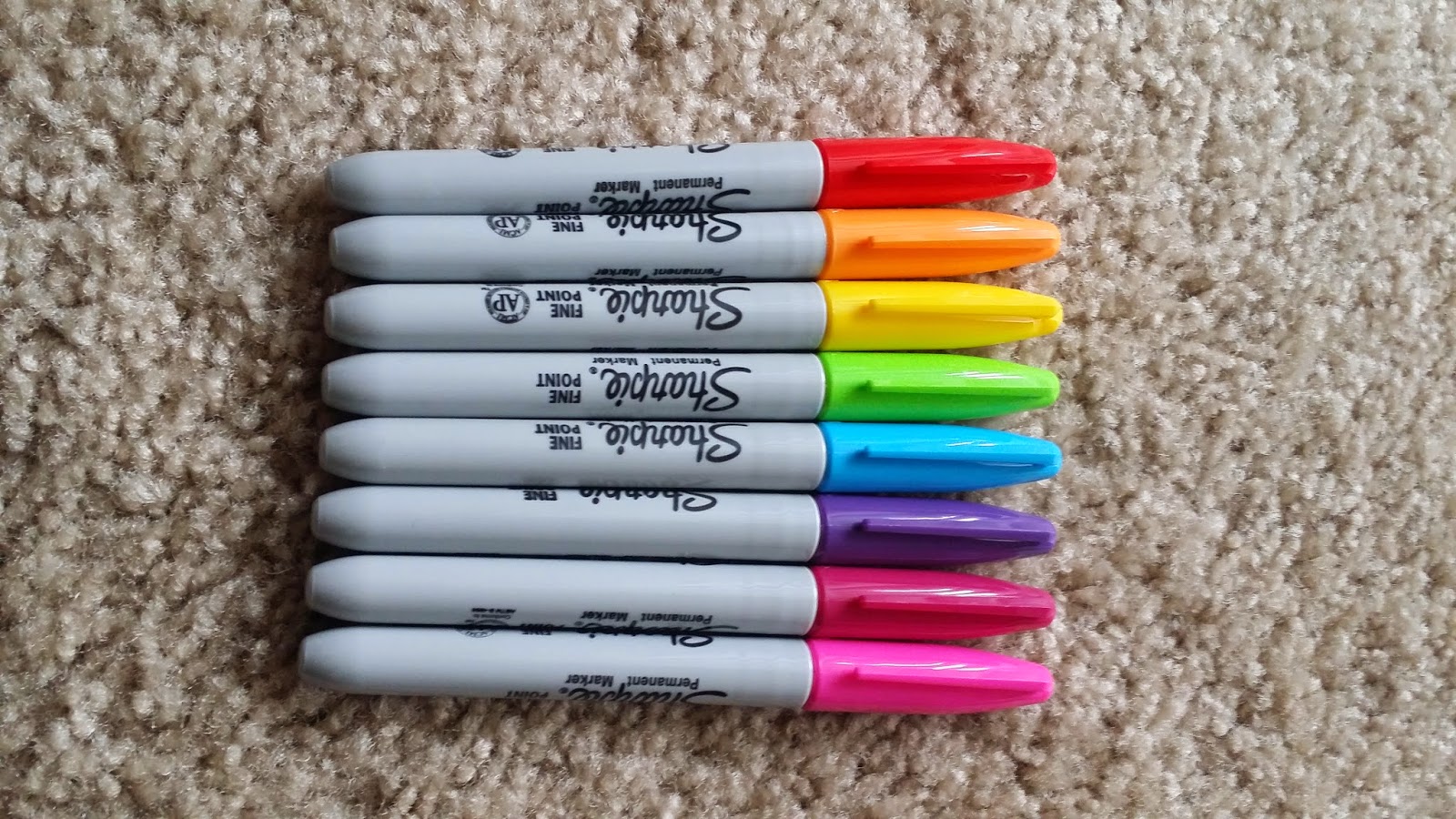 Then, I started drawing my dots. The coloring process took 10-15 minutes, which I completed while I was watching a show. I didn't take too many progress pictures because I got kind of caught up in the coloring! 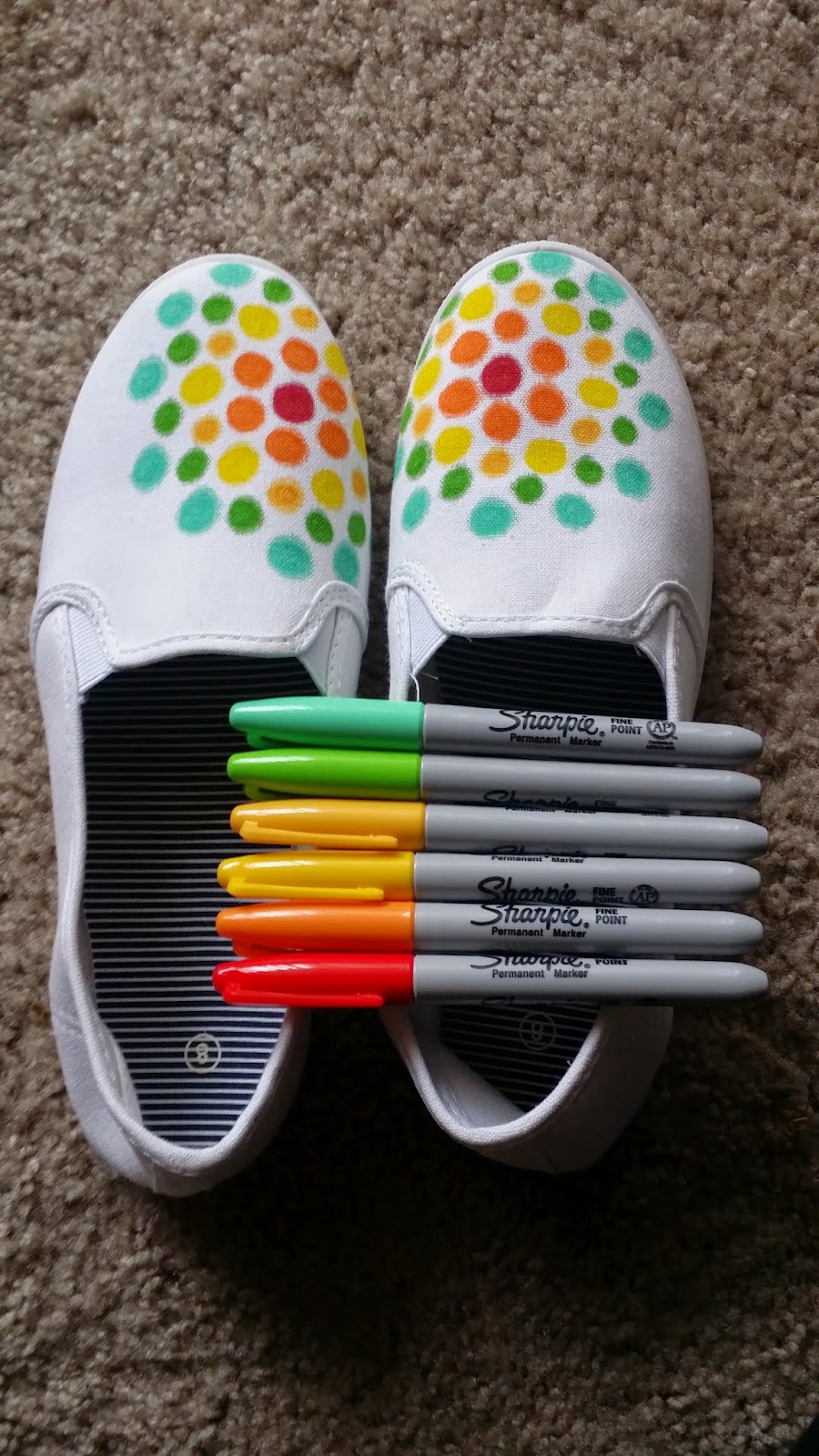 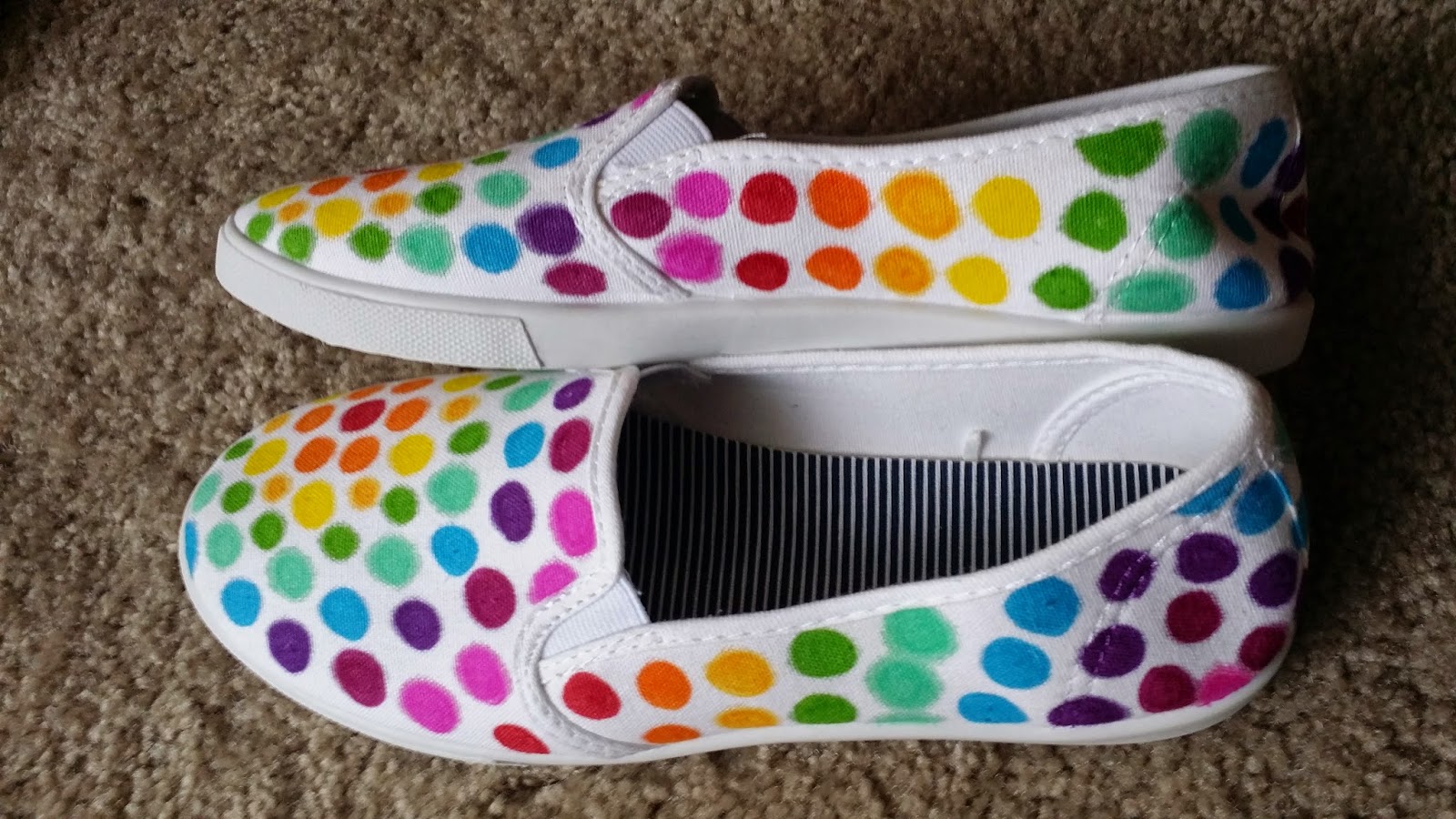 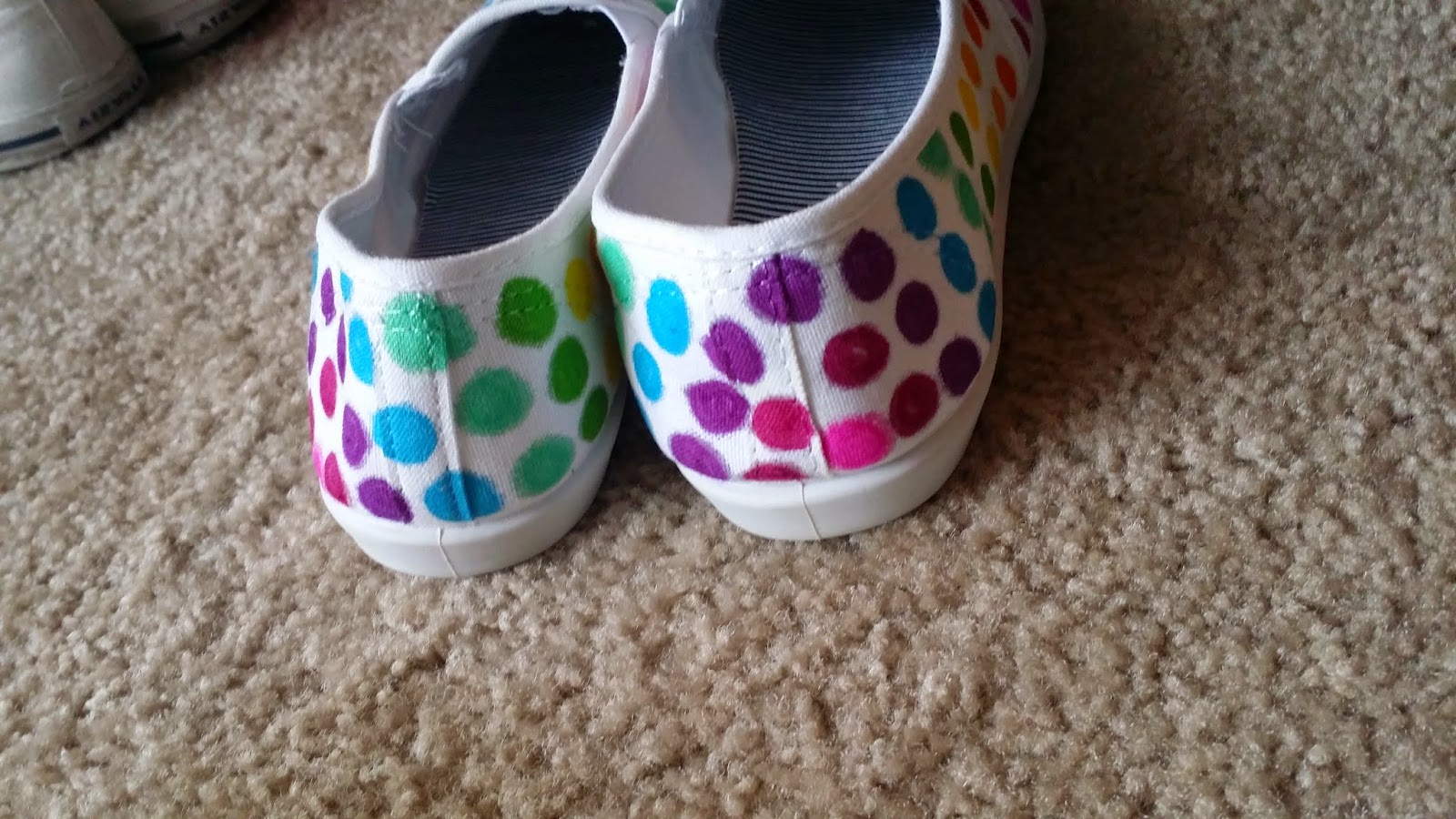 Now, I'm a crazy person, so I was a little bit bummed that the shoes didn't turn out identical, which I really can't expect with a project as subjective as this one, but once I started doing the rest of the steps, I ended up being really pleased that they were a little bit different and I wished that I had done more to make them obviously different.

Because I was doing this in the living room and I would lose my mind if my carpet ended up tie-dyed in only one spot, I first laid down a flattened plastic grocery bag (the one that my items came in from Wal Mart) and then doubled up two pieces of paper towel and put them on top of the plastic bag. The idea, which worked extremely well, was that the paper towel would absorb any run-off liquid and anything that soaked through the paper towel would simply hit the plastic bag.

Then, I just placed the shoes on top of the paper towel and plastic bag, opened up the bottle, filled the dropper with alcohol, and went crazy. 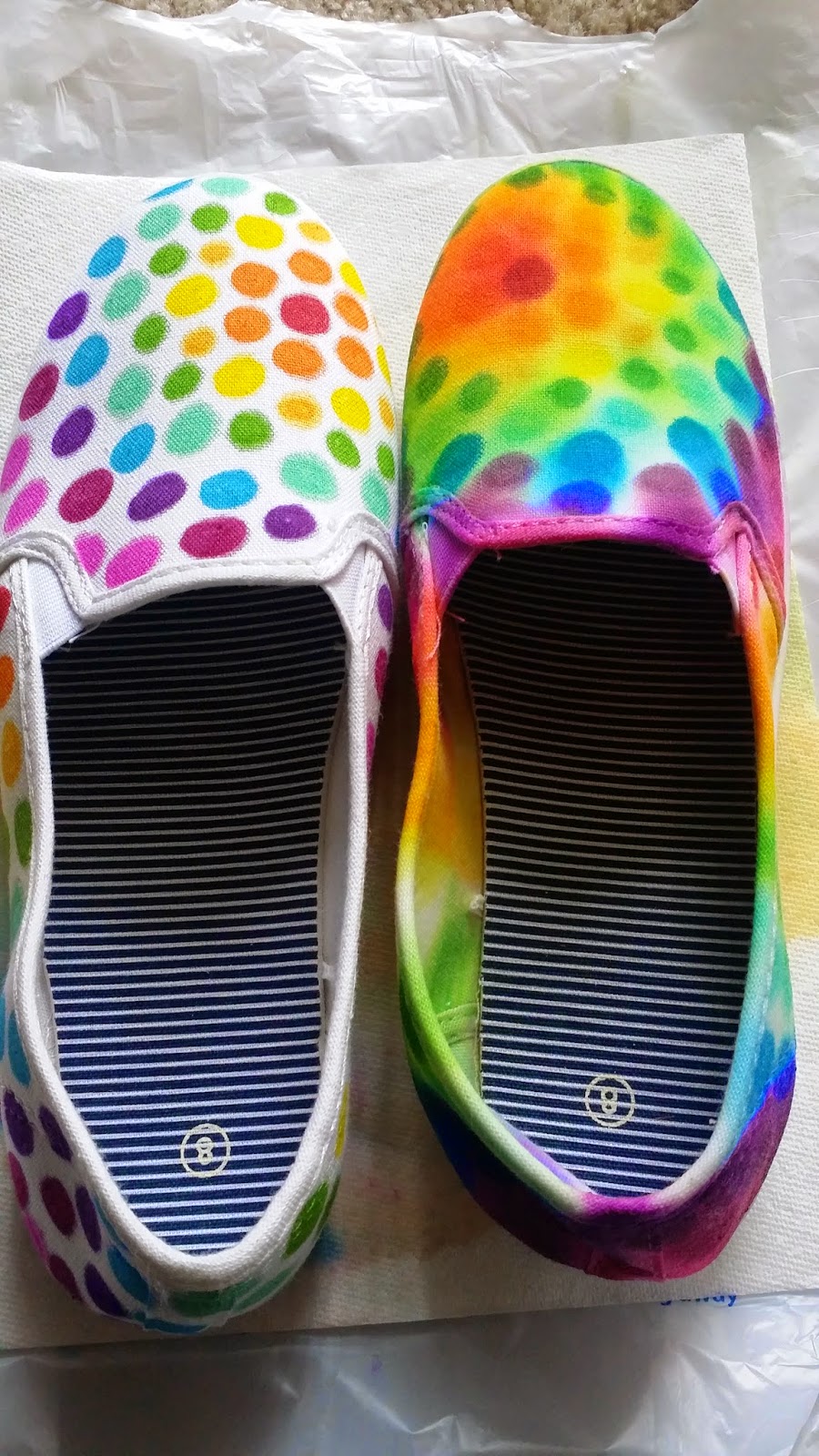 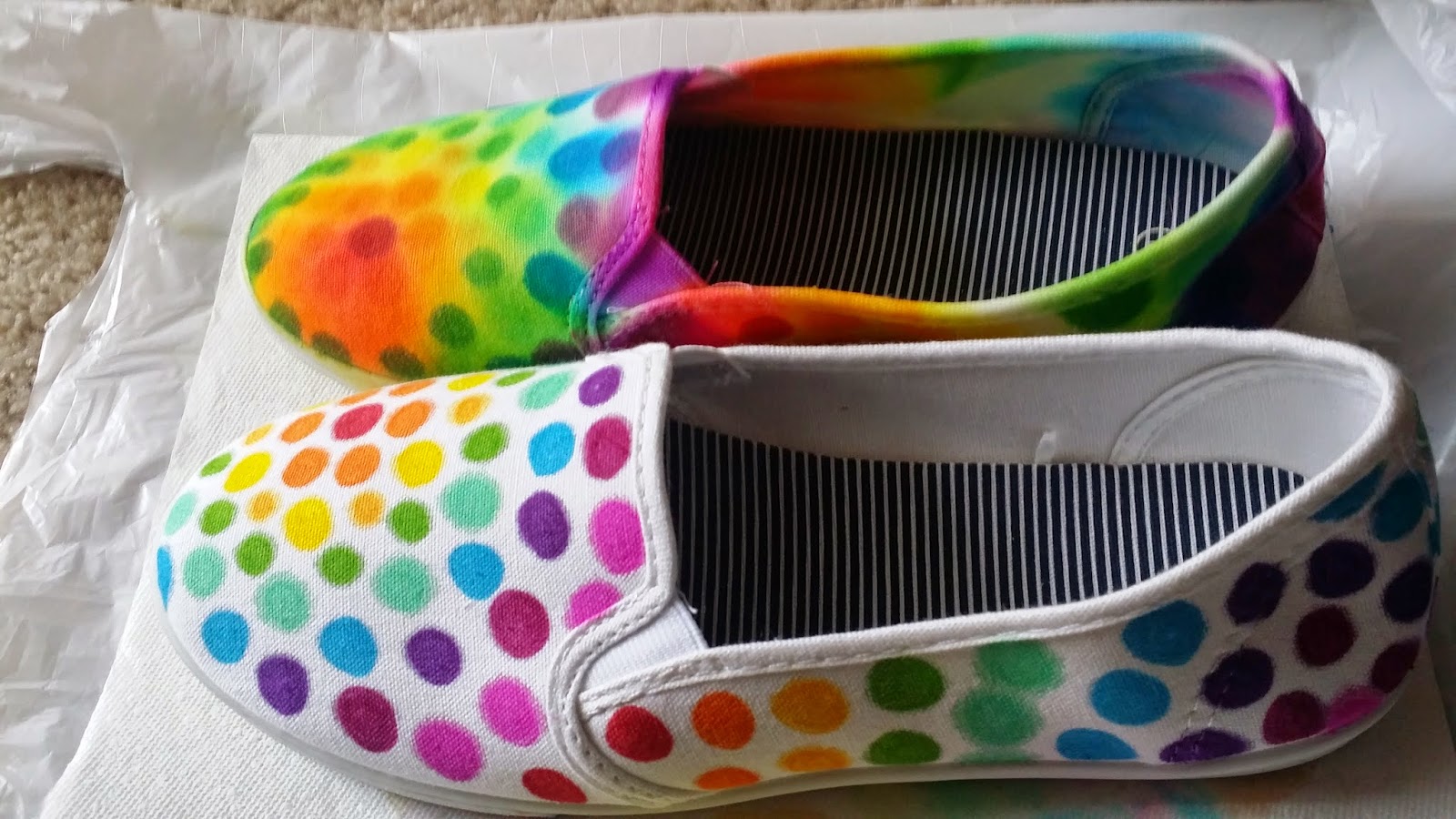 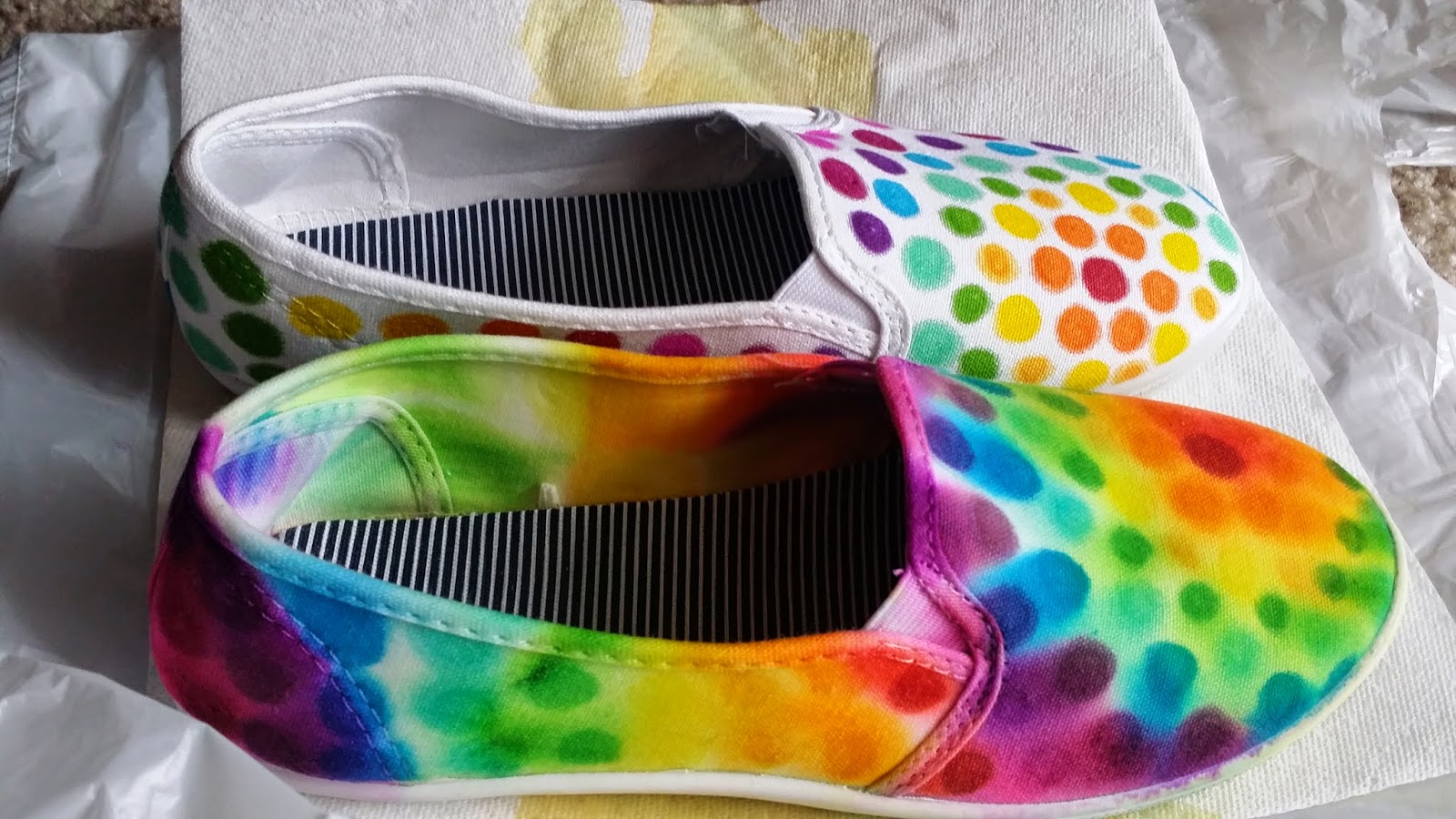 It turned out that the more alcohol I added, the more the colors bled (which is what I wanted). I spent about 15 minutes on this process and even got my hands a little dirty (or stained, if you will) by picking up the shoes and tilting them to make sure that the alcohol worked with gravity and bled the way I wanted it to.

Here is the end result directly after I finished the first alcohol soak, while they were still wet: 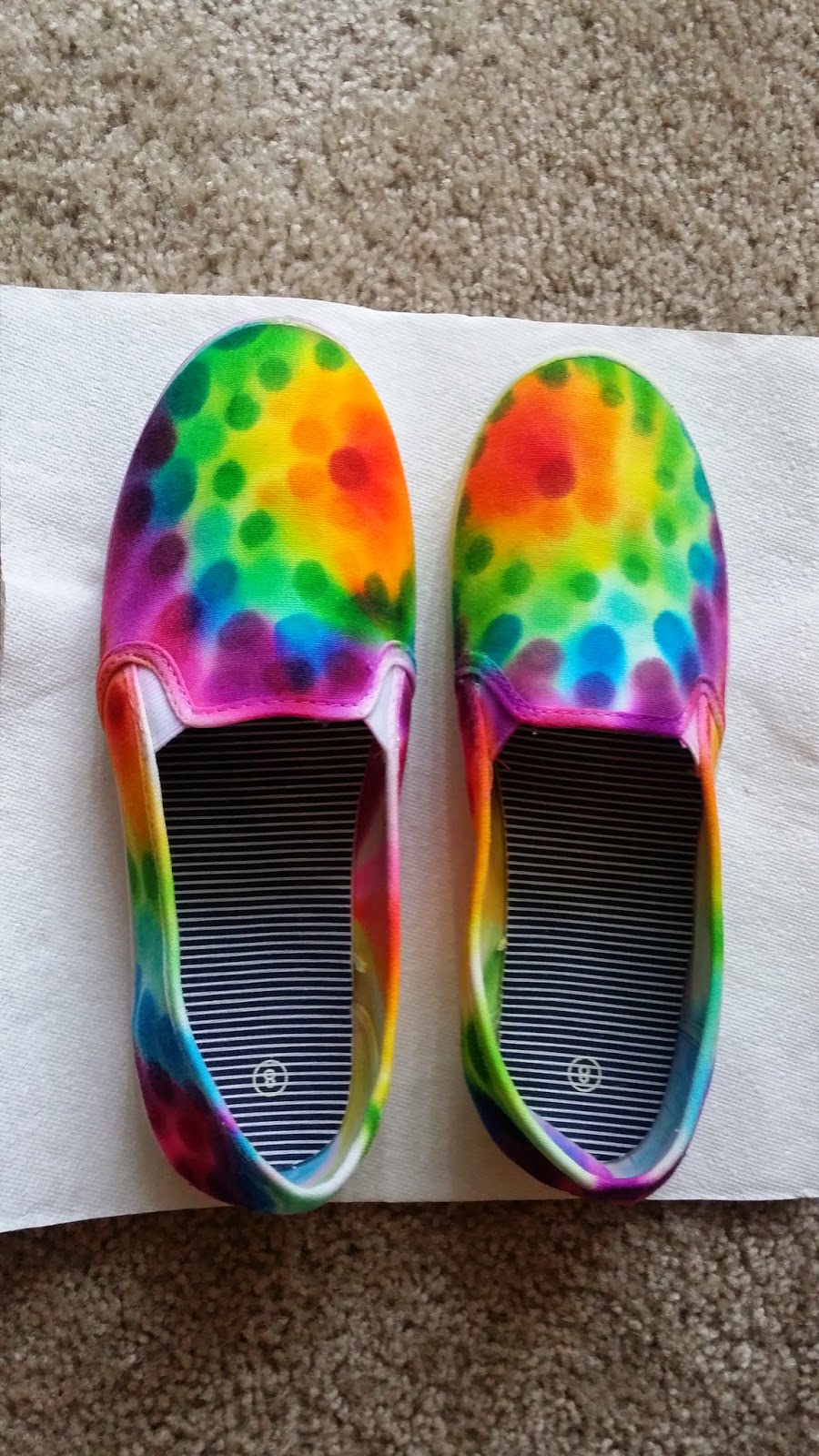 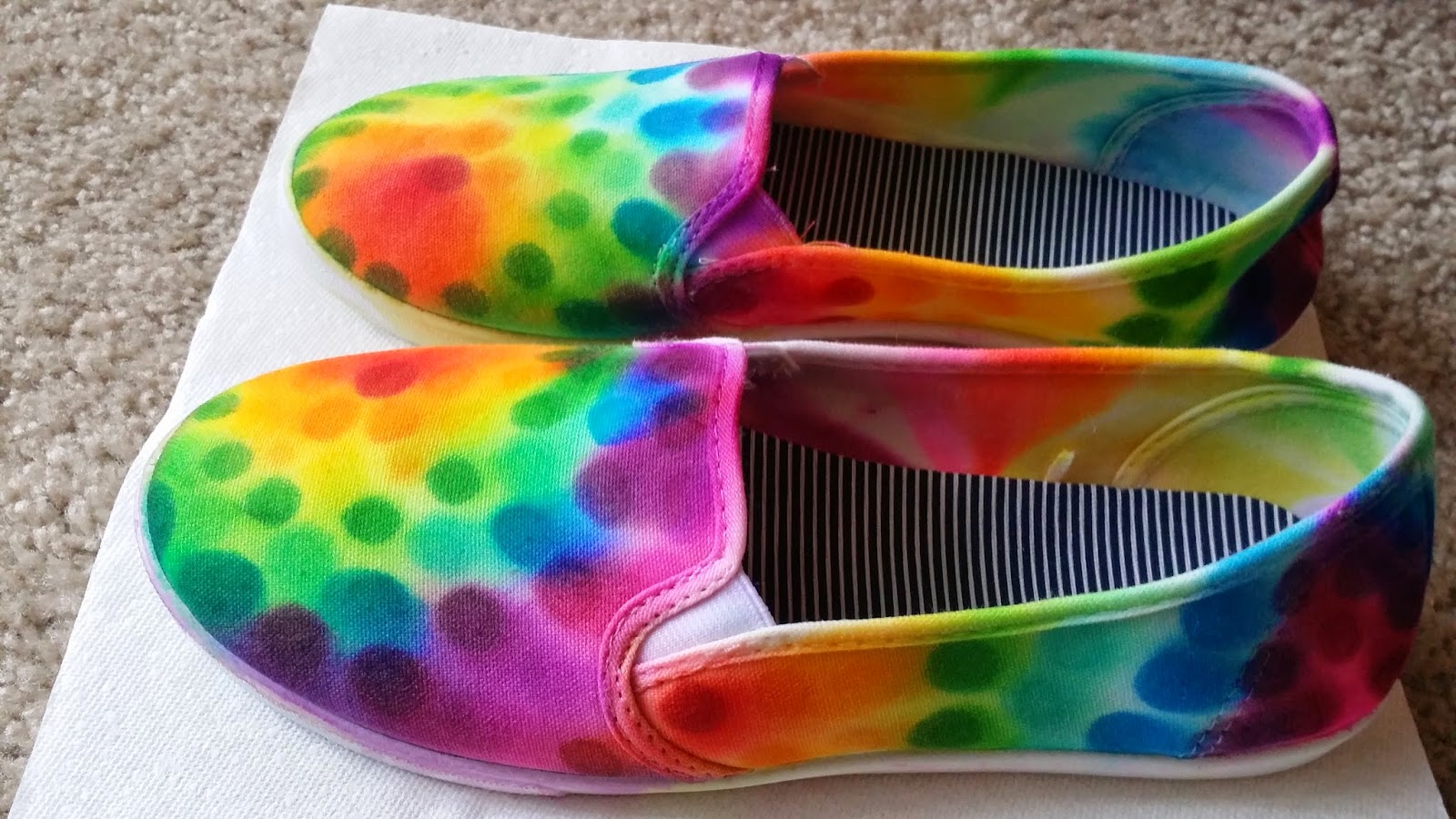 As they dried, the dots started to become less pronounced and continued to soak into the shoes, making the "dye" more even.

Because the alcohol has so little moisture in it, the shoes began to dry very quickly, so as an experiment I soaked them with alcohol again about 45 minutes into the drying process, just to see if the colors would bleed a little bit more and the dots would spread out further, which they did! 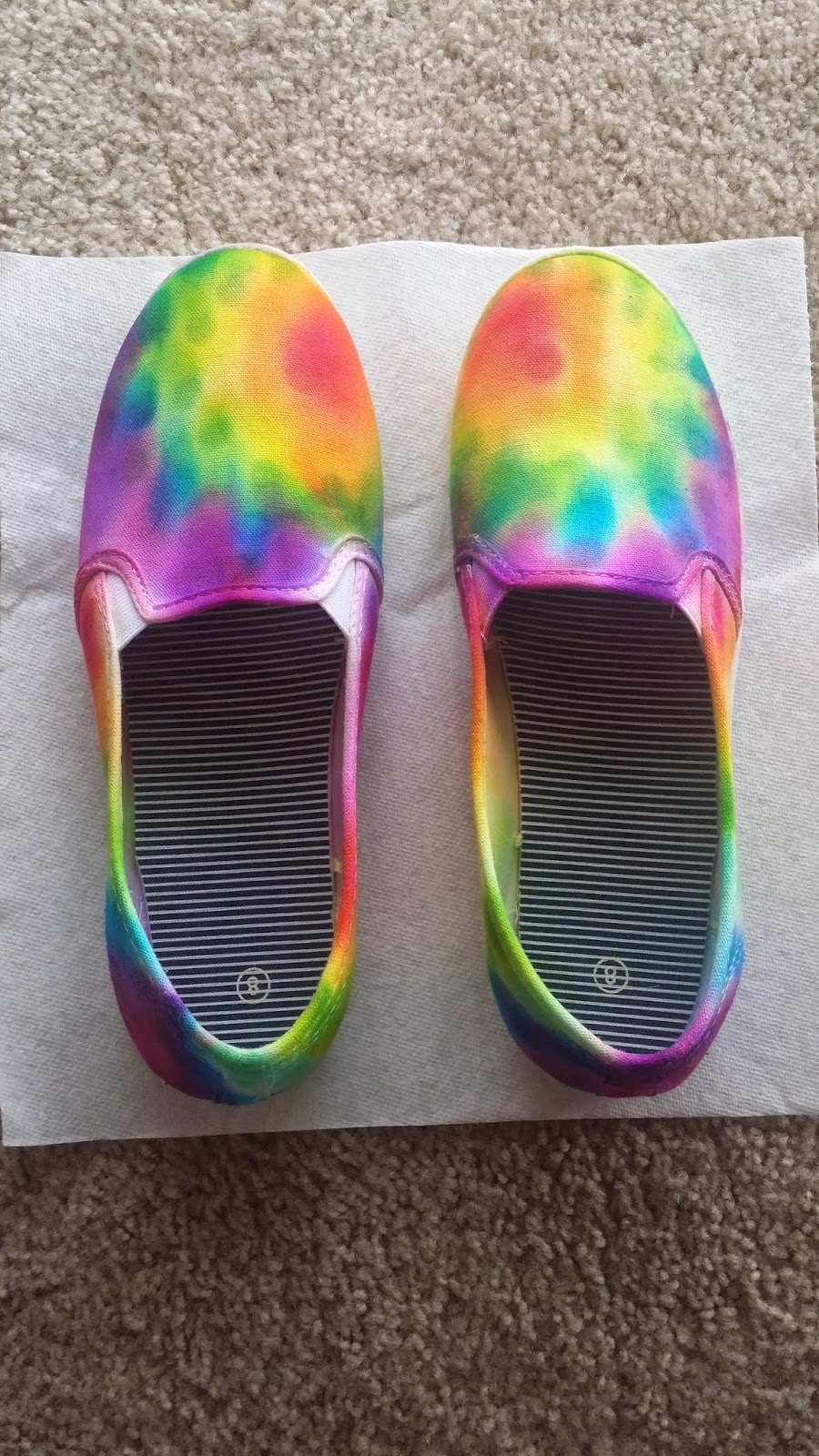 Completely dried after a second soak in alcohol 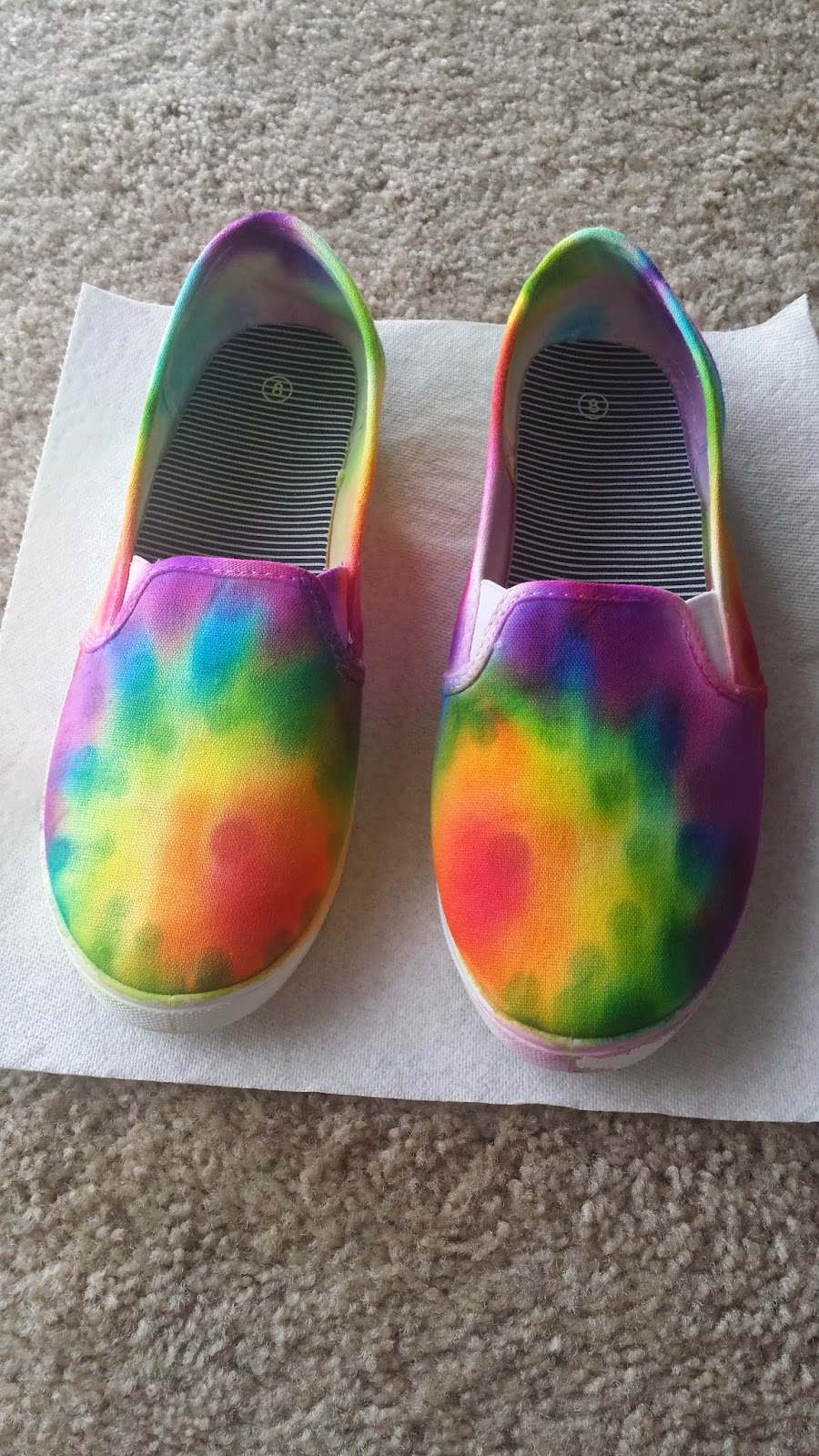 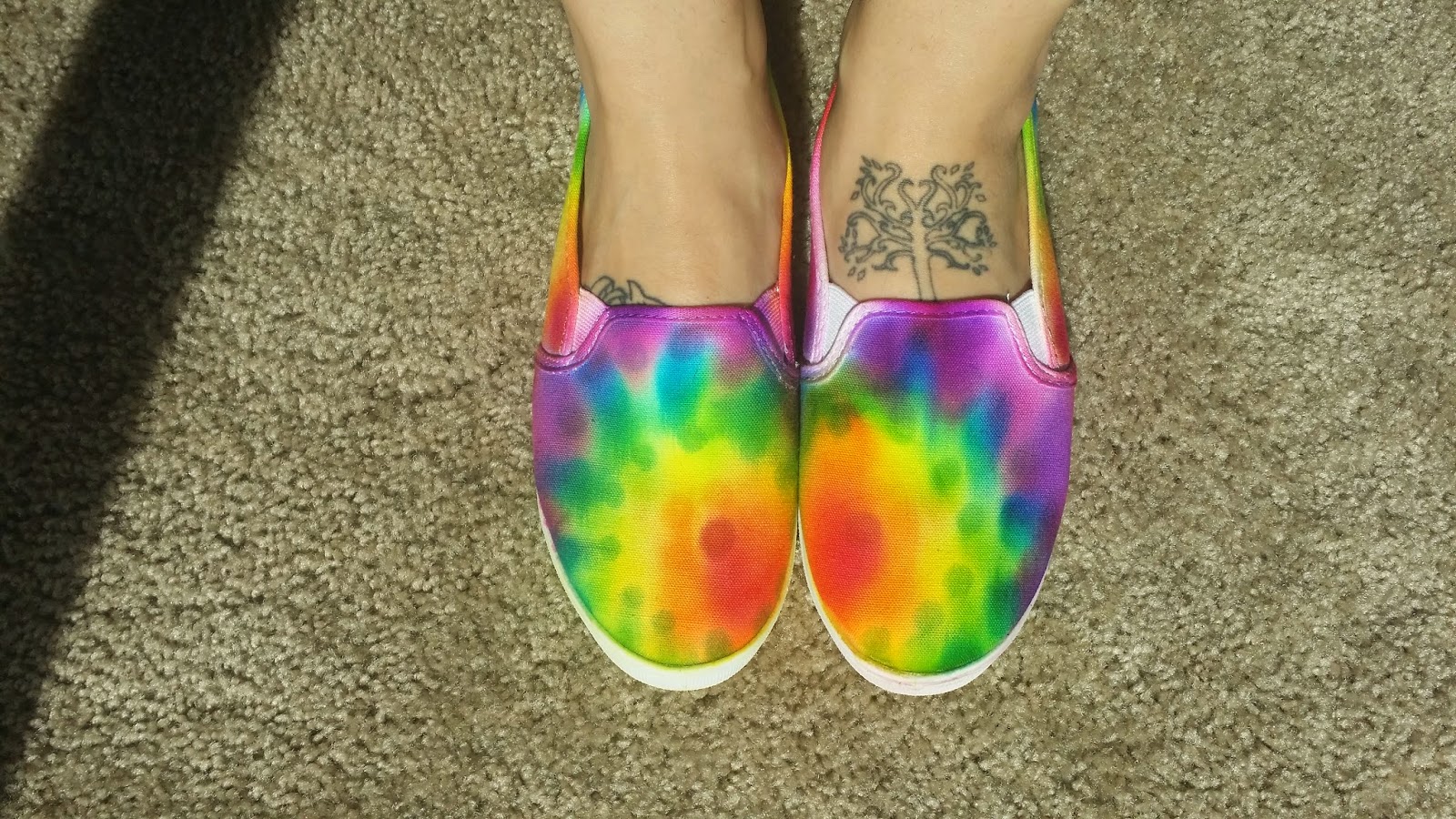 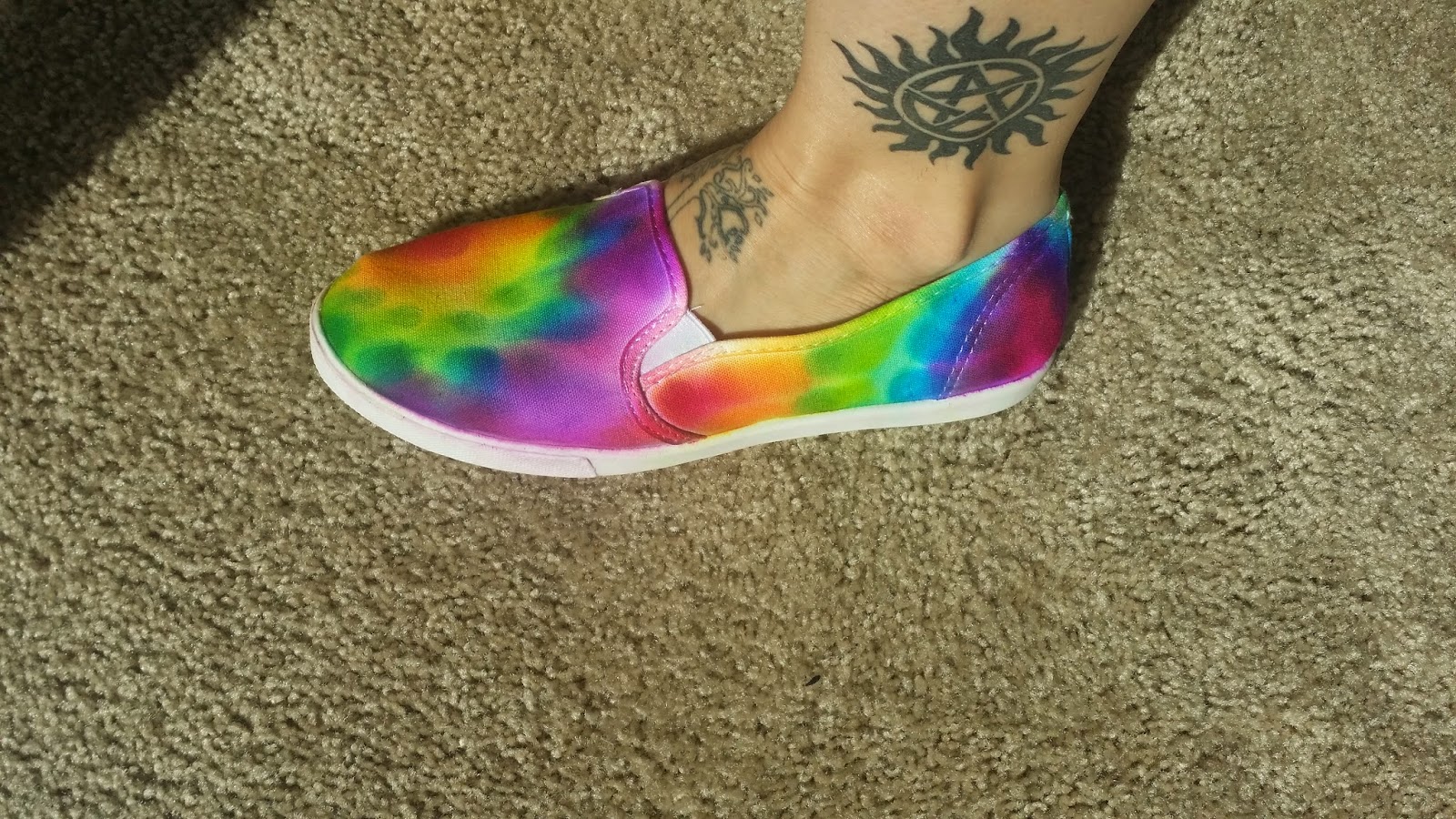 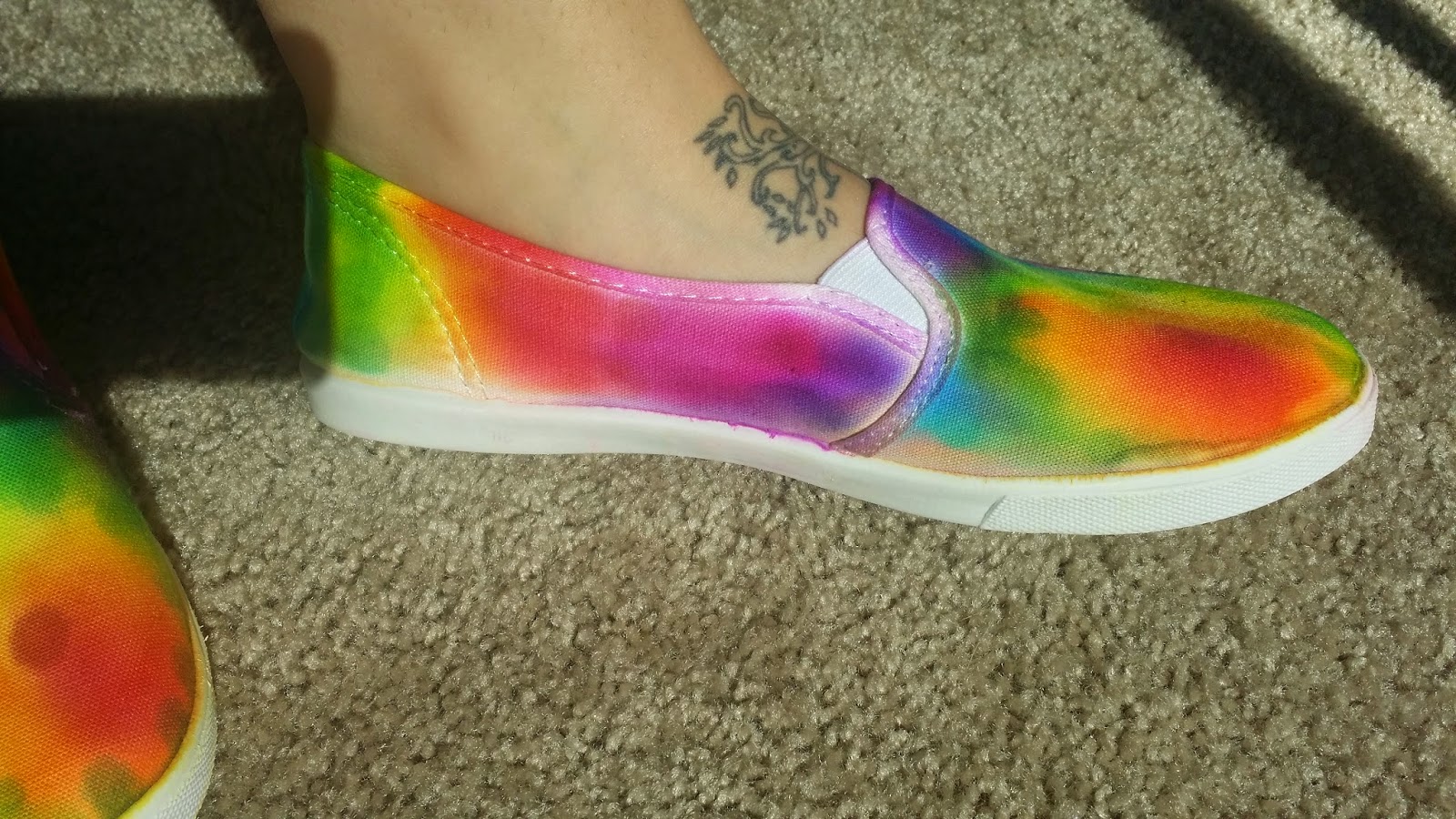 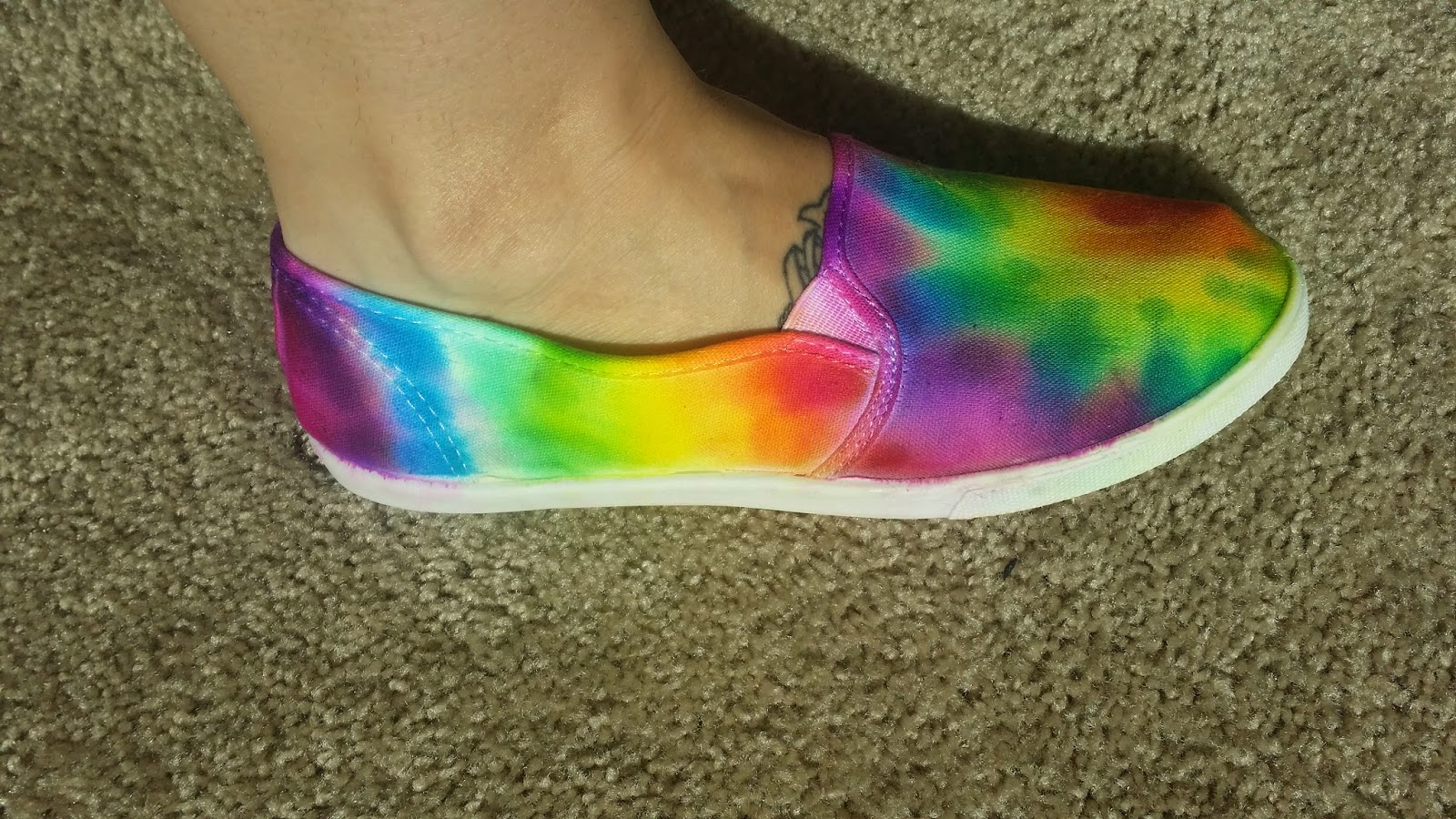 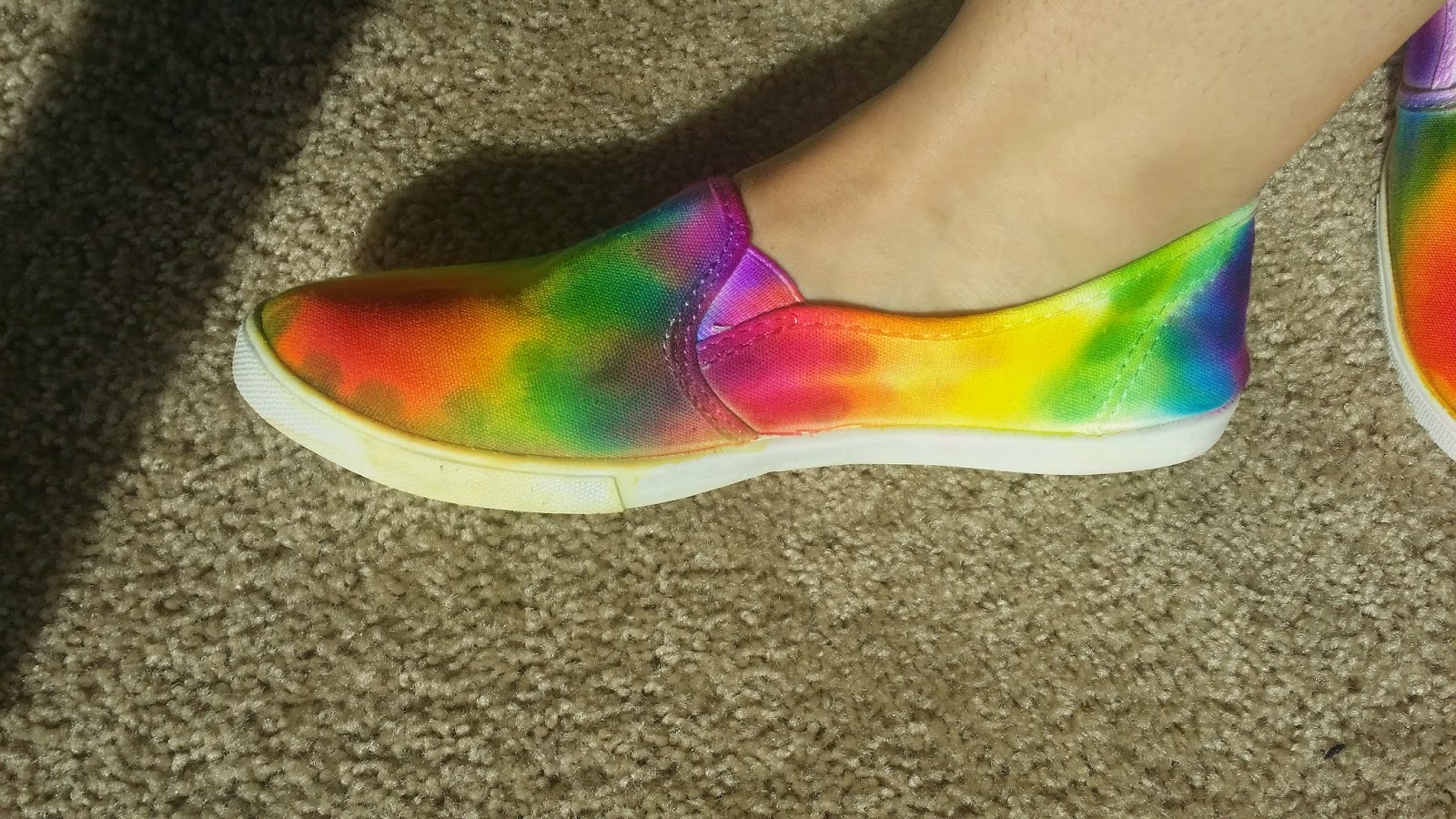 I'm super pleased with the end result! These are such a cute, cheap project. I would definitely recommend doing this as a project for yourself or even as a group project for kids, teens, social groups, parties, etc.! I can't wait to wear them!

What I would change:
I can't say that I would for sure do anything differently, since I haven't personally experimented with any other options and I don't know the outcome, but I think that this could be done in a way to prevent the dots from staying. Possibly scribbling on the tie-dye design and then using the alcohol to blend? Maybe use only the lighter colors, since those seemed to blend out the best? This could definitely use some experimenting, but for now, I'm cool with my groovy new shoes.

I also had some trouble with the alcohol bleeding onto the rubber parts of the shoes, and more alcohol didn't take it off, so now I have stained rubber bits. I was not really jazzed about this, so I tried removing it with acetone. This DID work, however it worked because it corroded the rubber part of the shoes that I was trying to remove the ink from. I did continue the process until I was pleased with the result, but I would be a little more skeptical about doing this if the shoes weren't only $6. It also got a little dangerous in some spots, because if you get too close to the edge of the shoe where the design is supposed to be, the acetone will make the inks bleed upward.

I have a couple ideas about preventing the bleeding from happening. I feel that tape or painter's tape won't necessarily work because it may just come off due to the moisture. I have a thought that painting Elmer's Glue on just the rubber edge and letting it dry may prevent the staining, and then after the shoes are finished it will peel off. However, this may not work because the moisture will just make the glue sticky again. I have no idea, so if someone tries this, please let me know.

The other idea I have is Vaseline. Apply it evenly to the rubber edge after you've drawn on your dots and then start with the alcohol. I think this method may work better. Again, if anyone tries this, let me know! I will also update all of you if I try either of them or find a method that works. 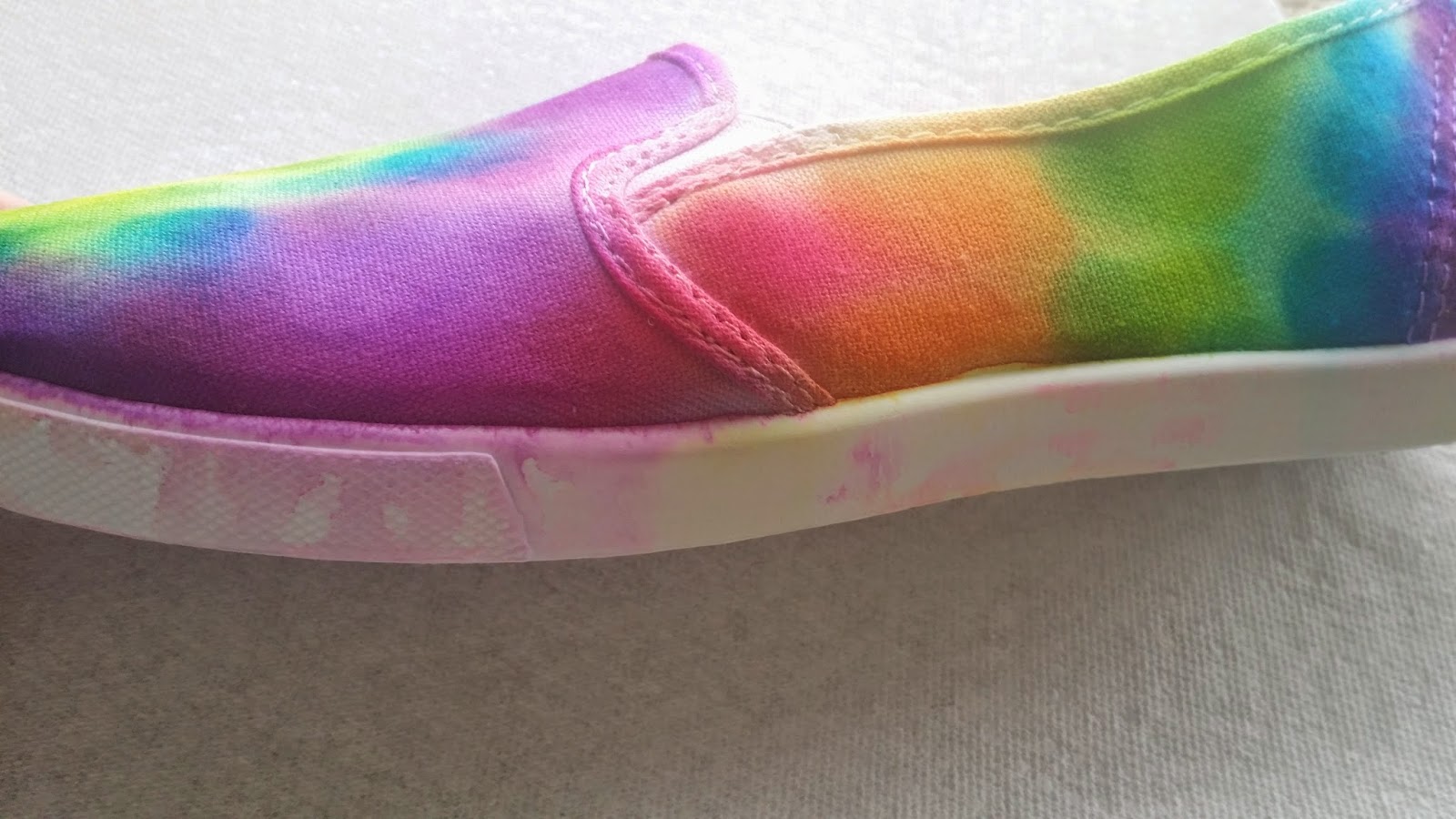 Example 1 of the bleeding I was trying to remove 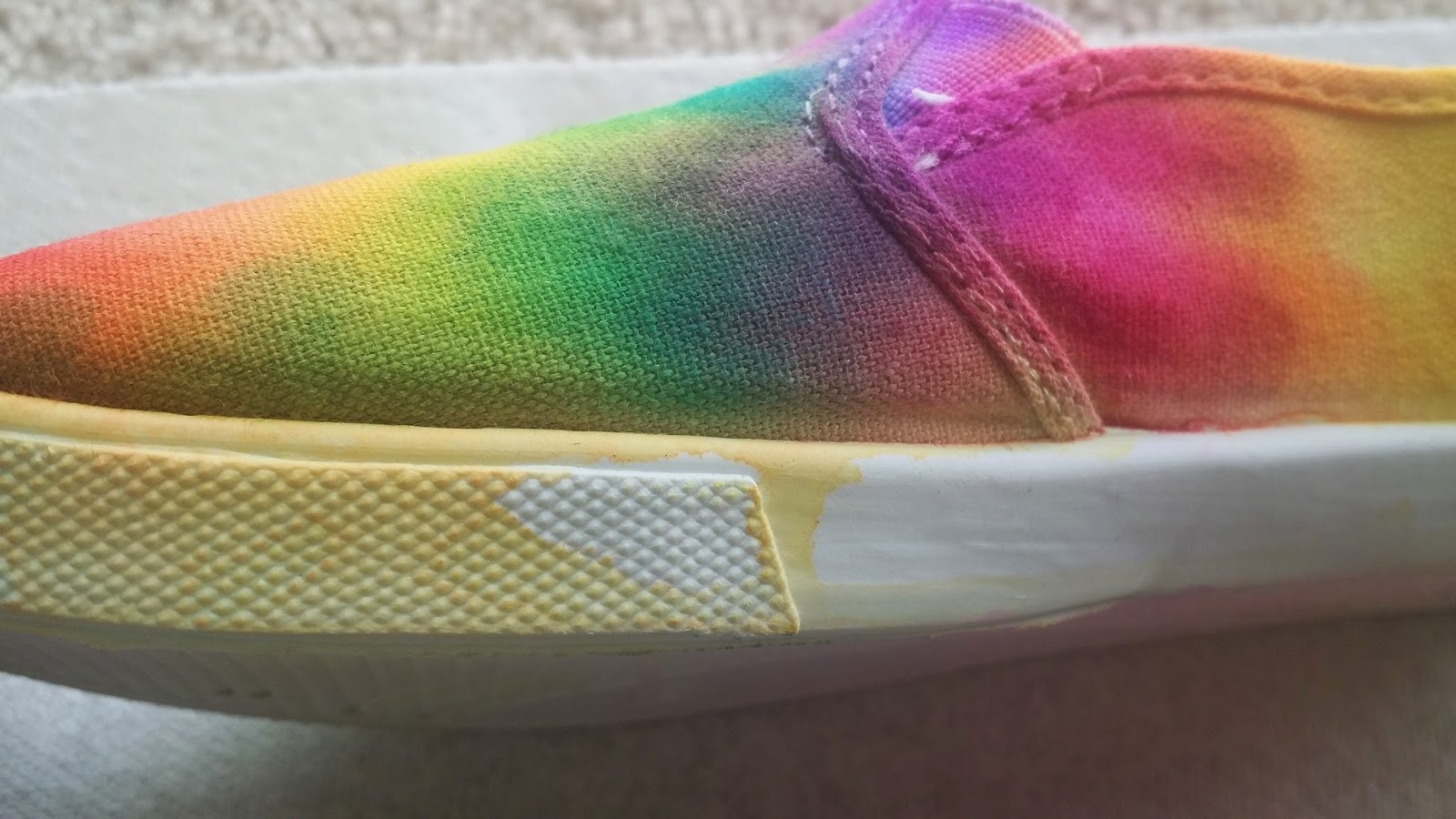 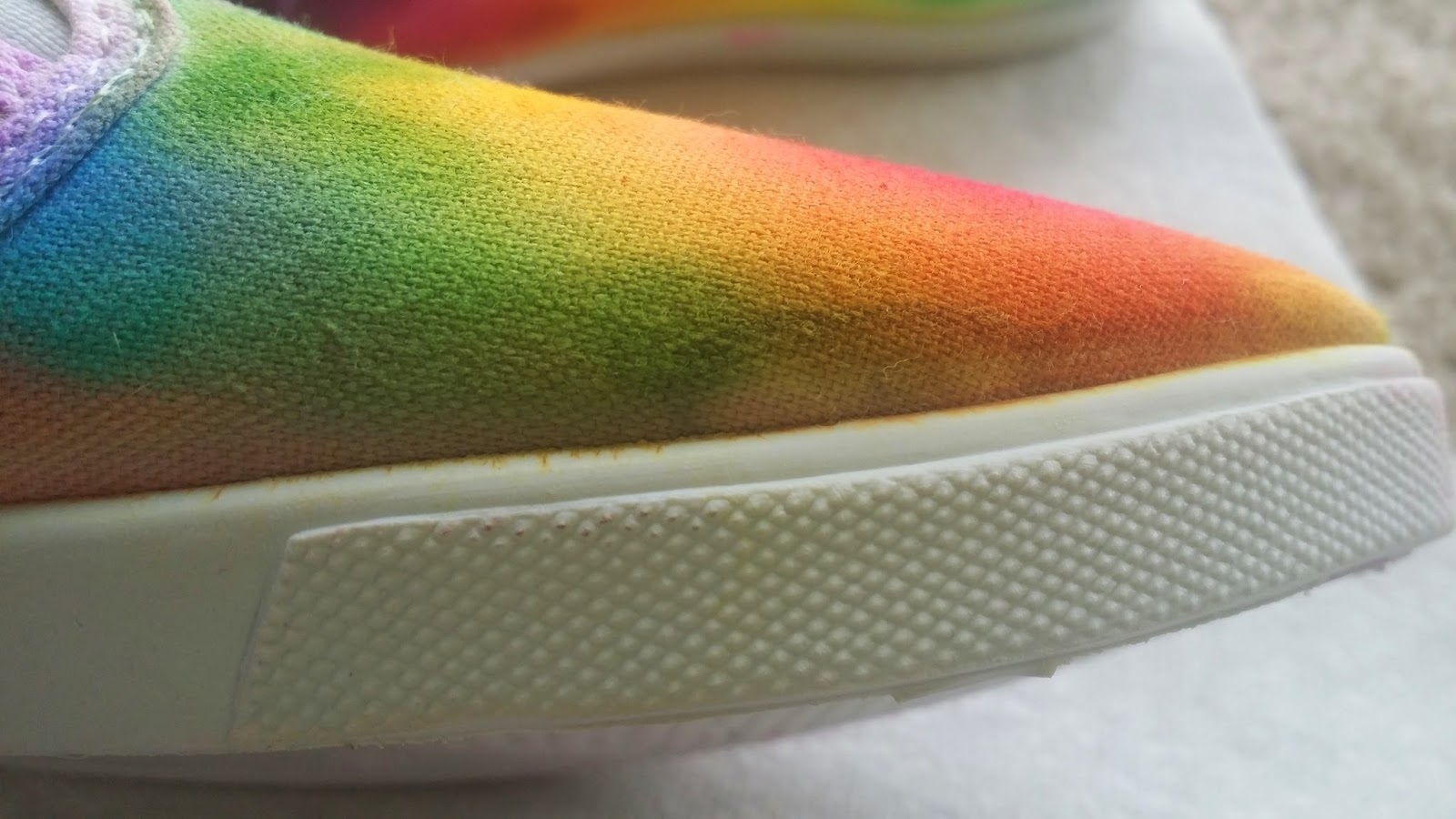 A bit of the shoe where the acetone moved the ink the wrong way. As you can see, the acetone did remove the bleeding, however it affected the ink in the fabric when I got too close to it.

Note: Due to the fact that 95% of the comments on this post (and on this blog in general) are spam comments that I have to personally moderate because I won't allow questionable links to be posted on something I'm associated with, I have permanently disabled comments. My sincere apologies to anyone who may have a genuine comment or question, it seems that bots have ruined it for everyone!
Posted by Brook at 1:09 PM

Email ThisBlogThis!Share to TwitterShare to FacebookShare to Pinterest
Labels: diy, do it yourself, pinterest, project, tie dye, tutorial