How I Easily Formed Life Changing Habits in One Year: The Chart Challenge

As I sit here, there is a stack of 12 papers in my desk in my office. I cherish this stack of papers like no other. It's just an ordinary stack of papers, they're not magic. They're not valuable. I printed them at home and wrote on them myself, in my messy scrawl that everyone insists they can't read. They wouldn't mean much for anyone who stumbled upon them, but for me they changed my life.

Flashback to 2017, I was continually frustrated with myself. I'm going to really open up here and let y'all in on a dirty little secret-- I am the actual worst at brushing my teeth. I can't even describe to you how much I hate it. It overwhelms my senses in a way I can't describe. I hate it nearly as much as I hate putting away laundry, and my husband can attest to the temper tantrums I have had when he's brought me a basket of clean laundry and dumped it into my already full basket of clean laundry that I'd avoided putting away for three weeks in a row (that would be four weeks of laundry, as we always do it on Fridays or Saturdays).

As an adult, I found even less drive to brush my teeth because of my lack of in-person communication. When I was in high school and college I had people to see, and people who would make fun of me if even a single hair was out of place (or for any number of other reasons-- the girls in my school were cruel). But after I graduated and dropped out of college, suddenly there was no one to force me into the habit, and I slowly just... Quit. Unless I could tell they needed brushing (usually every other day or so), I just wouldn't do it. I couldn't make myself sit through the torture of it-- the spicy mint toothpaste, the bristles touching my gums, the foamy spit it makes, the coldness that is left behind by the mint, the time it takes. It's all just too much.

I was also struggling with a number of other things-- for example: motivation and drinking enough water. One of my major concerns was also short term memory retention. I would often sit with my husband at the end of the day and review the day's events so that I could try to hold on to them, otherwise they would just slip away. Sure, I could remember the events weeks later, but I couldn't tell you about them the day after. The last straw was really when I sat down one evening with my husband and asked him if I'd gone to the doctor yesterday or the day before. The answer? That same day. I'd gone to the doctor that morning and couldn't even remember it 11 hours later.

Enter my idea: A mental health chart. A way to keep myself accountable every single day, to try to overall better my health. At first it worked, but I fell off the wagon and gave up after a couple of months. When 2018 rolled around and I was in the midst of a deep depression, I decided enough was enough, and I pulled out the chart again. I was going to do it for a full year, come hell or high water.

As most things go, my chart started as sort of a rough draft-- a chart of things I thought would be important. Over the months, my chart evolved, and I ended up with something that looks like this: 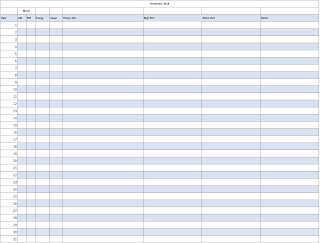 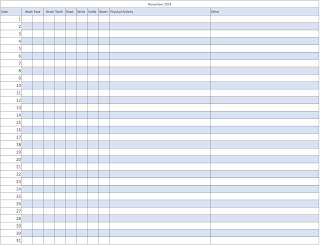 The chart is double sided and fits on a regular sheet of paper (with extended margins), and the accountability it holds me to is incredible. For the past year (and then some, I don't plan on stopping), this chart has been my constant companion. If I'm away from home for the night, the chart comes with me. It stays on a clip board on my night stand while it lives at home, and it goes into a folder when I'm traveling. I've even got a little piece of fabric tied to my phone charger, so when I go to plug my phone in for the night I touch or see the fabric and remember that I need to fill out my chart. Every night before bed (and sometimes in the morning, if I fall asleep too quickly, but it doesn't work as well when I'm lazy and do it that way), I fill it out and hold myself accountable for taking care of my body and my mind. I make mental notes during the day of things I want to chart, things I don't want to forget. On the days where I am too lazy to turn on the light and fill out the chart once I've already gotten into bed, I open a note on my phone and fill out the chart by memory (which I've come to find incredibly easy-- I mean, I've done this for 365 days, I know the order of the chart and what does in each box).

It turns out I'm a slut for check marks and a full chart.

Anyway, here are the things that this chart has done for me (and I guess that I've done for myself, since I was my only motivator, although I have a hard time crediting and complimenting myself):


I may have completed 12 months of charts, but I'm not done yet. I don't think I'll ever stop doing them, and this year I've given myself a goal to start checking off on the chart: read. I want to read every single day, even if it's just a single page of the book I'm working on, and so far I'm doing well. I know I'll miss a day at some point, because life gets in the way, but I'm ready to slowly tackle the other parts of my life that need improvement too. I'm sure the chart will continue to evolve and change (for example, I'd like to add in a migraines column and a triggers column), but that's okay because so am I.

If you feel like this chart is something that would be useful to you, I cannot encourage you enough to try it. I'm even happy to email copies of the chart document, and for those of you I know personally, if you'd like 12 copies of the chart printed and handed off to you, I'd be happy to do that too. All I know is that this simple, two minute daily task has changed my life, and I'm eager for it to do the same for others.